The network of Seinäjoki central hospital’s operating rooms was renewed in 2010 – 2015 in four different phases. Updating the data network required extremely detailed planning, as the work could not disturb surgery nor jeopardize patient safety with network failures.

“The hospital environment created its own challenges to both planning and implementation”, says Are Oy’s Project Manager Tommy Lemberg. While one room was renovated, surgery could be underway on the other side of the wall.

“The work had to be top notch in every way, because the connections already in use within the network must not be cut off under any circumstances”, Lemberg notes.

This central surgery unit includes 14 rooms in two buildings. In the day surgery unit, there are five operating rooms and a recovery room with 22 beds. Are’s project’s area was a total of 4,460 square meters.

“The general cabling of the rooms includes among others access controls, video surveillance, an image transfer system and a security system. A total of 90 kilometers of cable was installed.” 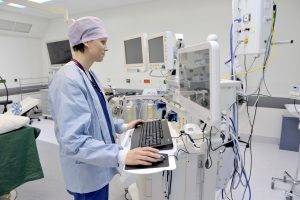 Erkki Nygård, who works as the central hospital’s system designer, also emphasizes the extremely detailed planning of the project.

“Introducing new premises was an critical moment for our information network, because the break could not last one day. All areas of the network had to run smoothly”, Nygård remembers.

The hospital had high demands for the network.

“A hospital’s network carries e.g. all patient information, call system, facility surveillance and office requirements in all their details. The network’s operational and interference-free reliability are naturally a relevant part of patient safety”, says Nygård. “In addition to the electrical network, the data network is just as important. There are data network points on the wall of every operating room, and fibre as well as copper run in their ceilings. Offices, hallways and rooms all have their own switch cabinets.”

The operating rooms’ network renewal was designed by Granlund Pohjanmaa Oy. Electrical work was carried out by Are, Pohjois-Suomen Sähkö and Sähköasennus Kohtamäki. The renovation of the Seinäjoki central hospital goes on in the other buildings. The data network project’s current electrical contractor is Pohjois-Suomen Sähkö.

Katso tarkemmat yhteystiedot
Avaa asiakastili
We use cookies on our website to improve and optimize your user experience. By clicking "Accept All", you agree to the use of all cookies on our website. Selecting “Reject” allows the site to use necessary cookies only, which will prevent certain site functionalities from being performed. To disable some cookies, visit the cookie settings.
Hyväksy kaikkiHylkääEvästeasetukset
Manage consent

The cookies that are categorized as necessary are stored on your browser as they are essential for the working of the basic functionalities of the website.

We also use other types of cookies that e.g. help us analyze and understand how you use this website, and to offer certain functionalies and services. These cookies will be stored in your browser with your consent, which means that you have the option to opt-out of these cookies. Please note, however, that opting out of some of these cookies may have an effect on your browsing experience.